Chamonix can be found in the French Alps, specifically in the Haute-Savoie department of the Auvergne-Rhone-Alpes regions of southeastern France. The commune is very popular with skiers and people who enjoy mountain sports and activities. With all of those outdoor pursuits, you’re bound to work up an appetite. Luckily, there are so many delicious dishes that are local delicacies that you simply must try if you are visiting the area. With a focus on local ingredients, you’re sure to get a true taste of Chamonix while you’re there. 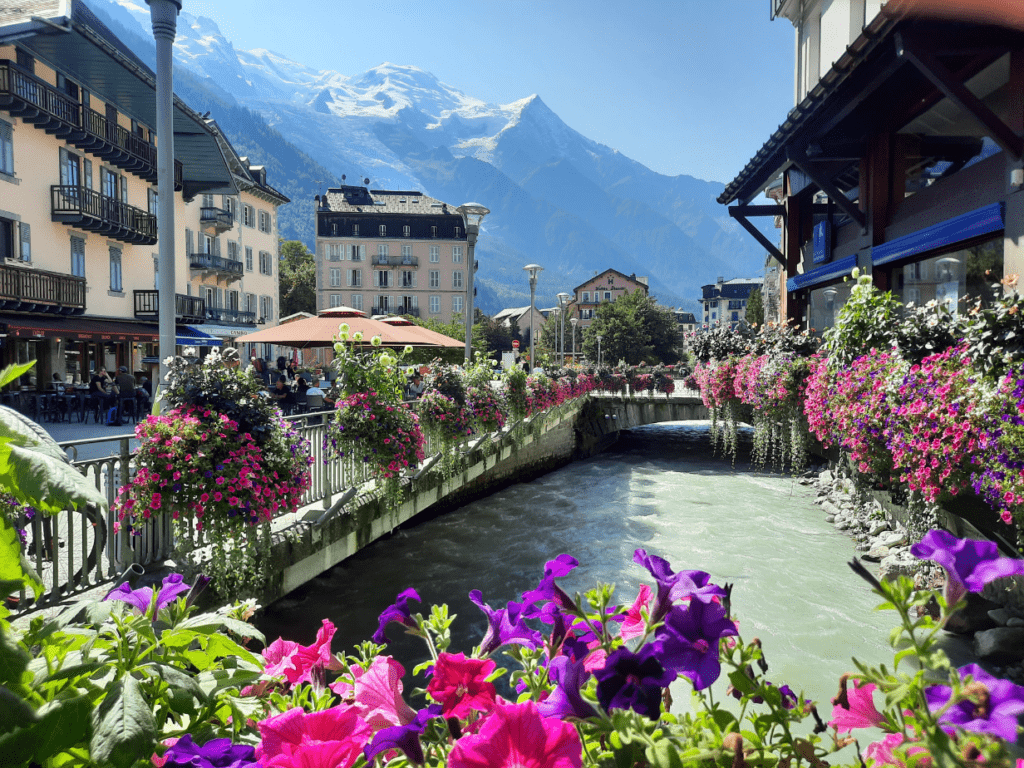 Crozets are basically a buckwheat pasta that are typically square and flat. They can sometimes be made of wheat or even a combination of buckwheat and wheat. They are often served cooked with cheeses like Tomme of Beaufort and sometimes with the addition of local mushrooms like chanterelles. Farcement combines both sweet and savory together in an unusual but satisfying dish. The ingredients used include bacon, onions, potatoes, cream, prunes, and raisins. They’re all combined, with the exception of the bacon, into a mold and then finally it is lined with the bacon. The mold is then placed in a pan of boiling water for about 3 to 4 hours. The final result looks like a savory cake. It is traditionally served at Sunday lunches, and usually cooks while families are at church. Definitely the most well known Alpine dish, fondue is a favorite for a reason. The pot full of delicious melted cheese in which bread is dipped is always a fantastic choice. A Chamonix faovrite, fondue gets a local spin with the local cheese included in the pot. Often cheeses like reblochon, gruyère, comté, beaufort or emmental are used with a bit of garlic, a dash of local liquer, and a little bit of flour to thicken the whole concoction. Sometimes other additions include mushrooms, nuts, tomatoes, and chillies. 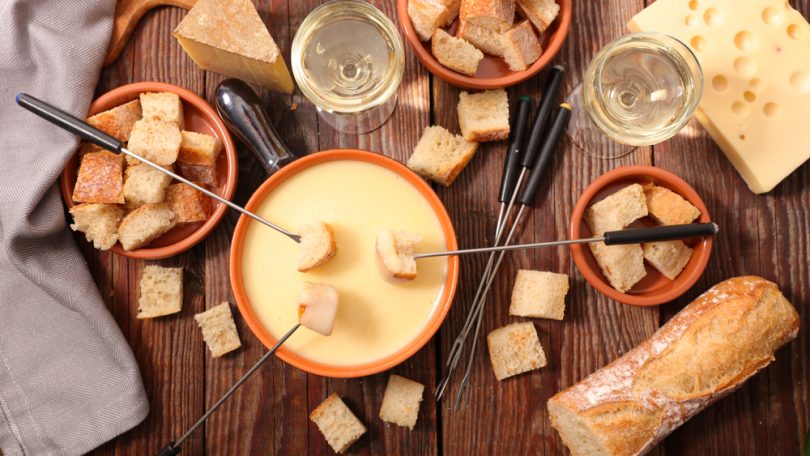 Speaking of cheese, another classic Alpine delicacy is the raclette, which is melted cheese that is then spooned over your plate of meat, potatoes, salad, and pickles. The French version of this also Swiss food includes taking a half moon of the cheese and letting it drip over the food, using a wooden spatula the get the excess cheese on your plate. The Swiss version is a lot more orderly, but we don’t mind the French method. 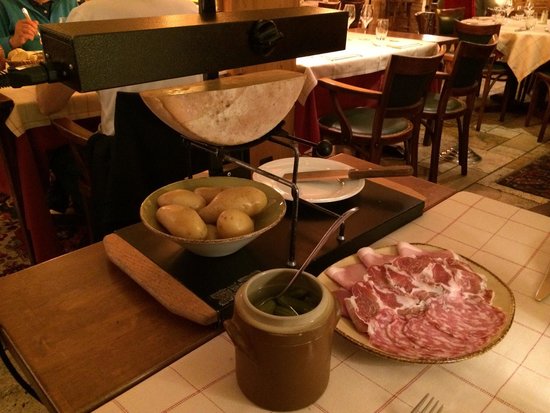 The pattern of Swiss-inspired dishes continues with the Rosti, a traditional farmer dish with roots in the Swiss region of Valais. It’s similar to a hash brown in that it is made of a pan-friend potato cake. It is then topped with cheese, a fried egg, and other toppings like bacon. 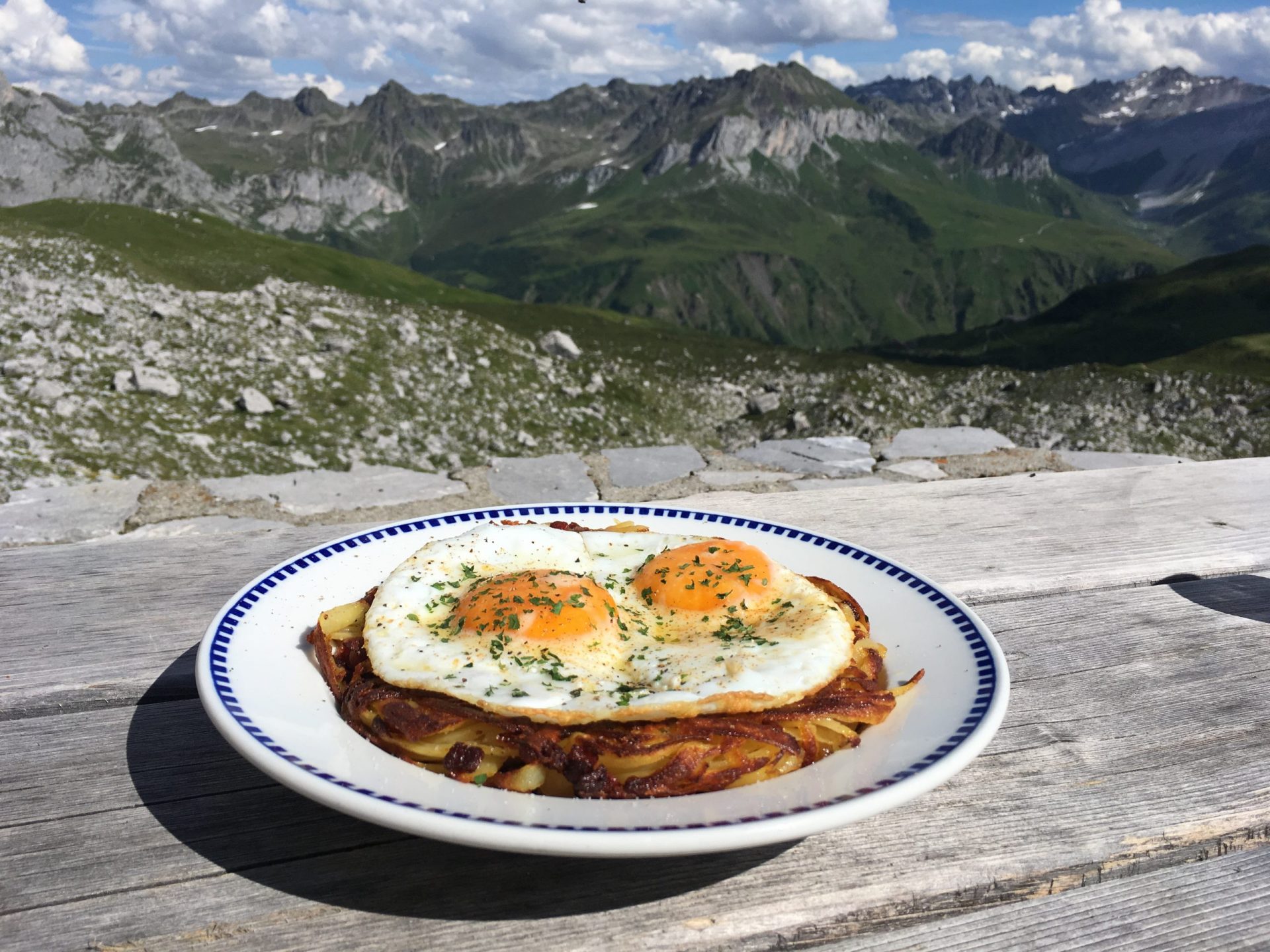